In order to tell this story, I am not entirely sure that there can be a beginning. It is a common trend for me to get way over my head on how to express my experiences but I will try my best for my readers. So, my beginning will be Christ and my story will be his Most Holy Mother, Mary.

For anyone who knows me and is interested in my spiritual life, I am more than willing to share the story about my miraculous rosary. Years ago, as I was growing more and more into my faith, I had a desire to start praying the rosary again. When I searched around my house, I discovered that all I had were those cheap plastic rosaries that you can buy in bundles. Who would ever want to pray with this cheap plastic thing? I understand that the rosary is a rosary but coming back into the faith initially was leaning towards the grandeur of God. I prayed with that plastic rosary but I continued looking for rosaries in the meantime. Everything I found online was quite expensive and I quickly got discouraged. Eventually, after a week or so, I gave up and prayed to God that I must accept what I have and if something better came my way, I will praise God for this miracle. I surrendered my desire for something better and embraced whatever the Lord wanted from me.

Well, my lovely and beautiful friend, Anne Lahola, came back from a pilgrimage to Medjugorje and when I saw her she said, "Walk with me. I have a present for you." She continued on to tell me about her time in Medjugorje and how it was magnificent. Then she pulled out a rosary: 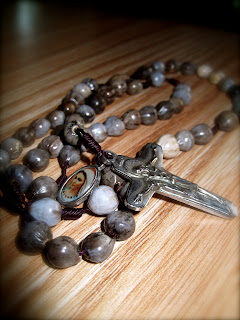 This rosary from Medjugorje was made at a house for boys who have dependency issues such as playing too much video games, drinking too much, eating too much etc. The beads are called "Job's Tears" which are actually seeds that naturally grow with a hole through it. Both Mother Theresa and Pope John Paul II had rosaries made with these seeds. Now, the crucifix is what got me. This crucifix is unique from any I've seen before because instead of just having Jesus dying on the Cross, Mary is standing at her son's side catching his blood in a chalice. This crucifix not only reminded me of what Jesus did for me through his death but also illuminated the fact that Mary was at the foot of his Cross and accepted that it was God's will that her child was to die in front of her to save humanity from the grips of Hell. She embraced this sorrow and sacrifice with love and faith. She accepted what the Lord gave her and praised for all the miracles she was presented with.

It was at receiving this gift that I realized that this was not a gift from Anne but a gift from God himself. He gave me my miracle which I prayed for just days beforehand. For the past five or so years, I have been carrying this rosary in my back pocket and every time I pray with it, I praise God for giving me tangible proof of his existence through this rosary.

Now wait for the kicker... I started to make rosaries and I struggled to find crucifixes for them all. When I had finally given up my search for finding some that I liked, I stumbled upon St. Joseph's Mail Ordered Rosary Parts (http://www.stjosephsmailorder.com) which has the best selection of rosary parts I've ever found online!! Anyway, wanna guess which crucifix I found and ordered? Out of hundreds of websites, I never saw that crucifix until I found this website. Even until now, I still order parts from this website.

Again, last year I was looking for a wall crucifix and I was able to find one with the Jesus and Mary on it. I basically devoted my life to this crucifix and its meaning because it spoke to me twice already when I reached a dead end. I took this cross and learned to fall deeper in love with Christ and his suffering but perfect mother. 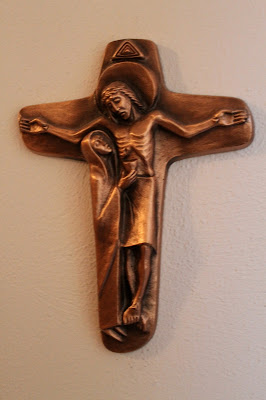 Well, I promised you a kicker!! I decided to go on a trip to Schönstatt with Nathan Schuster, a seminarian from the Archdiocese of St. Paul-Minneapolis, though I knew absolutely nothing about this place besides that it was in Germany. To be honest, I was kind of nervous that I won't enjoy the trip to this small town but I committed anyways. A couple of days before we were to depart, he was looking at the website for Schönstatt and I saw a picture of that crucifix and I said, "Hey!! I know that crucifix. It's basically my favorite!!" He kind of laughed and then said, "Well, it is kind of one of the major symbols of Schönstatt."(http://www.schoenstatt.org/en/about-schoenstatt/unity-cross-in-schoenstatt.htm) [If you care to learn more about it] MIND. BLOWN.

This crucifix, which is named the "Unity Cross", had shaped a lot of my reversion back to the faith and I was unknowingly going to the place were it basically has its home. If that isn't Divine Providence, I don't know what is!! Now onward....


Schönstatt is a small community located near Vallendar, Germany which is about ten minutes away from Koblenz. Buried in the hills, one would not suspect it was the center of a thriving Marian movement, well...besides the fact that there are Schönstatt Sisters walking on the pathways everywhere. I'm not going to lie, everything was a hike and half to get places but I got use to it after a while. After waking up at 4:30am, getting to the airport at 6am for our 8am flight, having the flight delayed until 11am, getting to Germany to discover we barely missed the bus, then finally getting to Schönstatt several hours after we were expected to arrive, I wanted nothing more than sleep. We were situated in the guesthouses ran by the Brothers of Mary and made our way to Mass in German. It was hard to focus and be prayerful especially since it I know next to zero German. We went back up the GIANT hill, ate dinner then Brother Marcus just us a brief tour of an exhibit of some heroes of Schönstatt. Through his broken English, I was still able to gather that I was in for the weekend of my life. Then sleep befell me.


The next morning, we went to the "Original Shrine" that is the source of the movement. I kid you not, this shrine holds a maximum of 20 or so people. It is no bigger than the average garden shed. Yet, this shrine is where the movement began and now there are over 275 shrines identical to this one scattered throughout the world, with the exception of two (both in the US). If there is one word to describe this chapel, it 100,000% would be "intimate". Now what is this all centered on you ask? Let me tell you. Most of my information comes from our tour guide, Sister Margarita from Puerto Rico who spoken English like someone from Florida. She was an absolute sweetheart :) 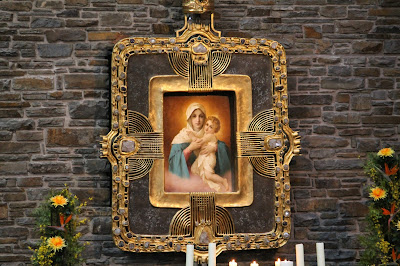 As I said, my story is Mary. This movement all started because Fr. Kentenich, the founder, was giving to task of being a spiritual director to these rowdy, trouble-making boys at a pre-seminary. These kids wouldn't listen so he prayed about it and came but with a solution. He presented the boys with an opportunity to become real men who are warriors, conquerors and victors!! What boy wouldn't want that? He asked them, not forced them, to devote their entire life to Christ by, for, with and in Mary, his Most Holy Mother. The image above, the "Mother Thrice Admirable" is part of every altarpiece in every Schönstatt shrine. You'd think these boys may be rebellious but very soon after, all the boys did everything for their Mother. Many of these boys were drafted into the First World War under Germany and every military medal they received, they would bring it back to the Shrine and give it to Mary as a sign of their bravery and courage for her sake. Many of these boys died in the war but all of them died knowing the love of Christ through his Mother.

I could go all day talking about this but I must move on!! If you want to learn more, you can contact me somehow if you'd like or wait to we see each other in person. Addiamo... 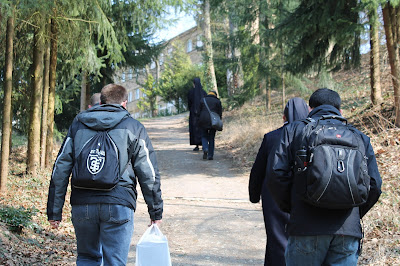 We then continued up a hill to get to the Church of the Blessed Trinity on Mount Schönstatt, which was the church Fr. Kentenich commission in the 1960's to be the main church building. The hike was as bad as the last one but I didn't even notice because I was in Heaven!!! Schönstatt had already stolen my heart away early that day. The entire walk, Sister Margarita continued to tell us more history about the movement and got to know us more. 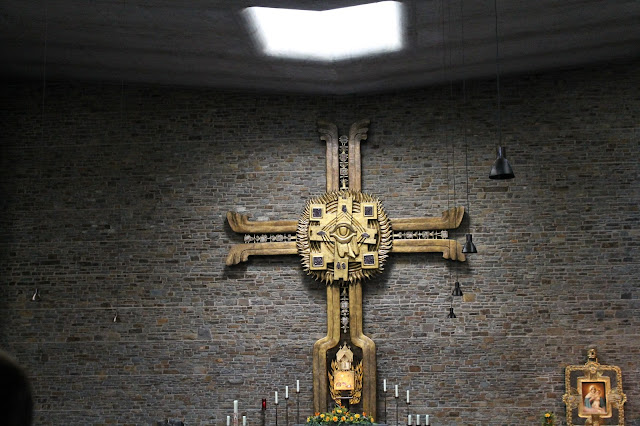 I will be the first to say that I'm not a huge fan on modern church design. The Renaissance, Gothic and Baroque styles of architecture were absolutely stunning. They are transcendant and what I recognize as true art. I don't make this exception often but this church was different. Though it was incredibly modern, Fr. Kentenich (basically, this man is a saint) designed the church to be transcendant once you fully comprehend the details he gave to it. I made the picture bigger so you can see this cross. This cross has so many small details about it that make it go from "oh..." to "ahhhh...." if you get what I'm saying. That skylight is actually the only light source for the entire church during the day. The tabernacle is dead-centered which is an infinite plus in my book. Very simple but transcendant.

Fr. Kentenich died in 1968 from a heart attack as he was unvesting in the sacristy after saying Mass. His tomb is sitting in there and people are surrounding it prayer. Though he died 45 years ago, the movement continues to build momentum. His cause for beatification is open along with two other members of Schönstatt.

The entire experience was a blessing from God. Even a few weeks later, I'm still not sure what happened in my heart while I was there. All I know is that Mary with take you in as her child to bring you to salvation through her Son.

This is the call of Christ in our lives. He tells us to take Mary into our lives, into our households, and glorify Him for his ultimate sacrifice and the redemption of our souls.

Come, O Holy Spirit! Fill the hearts of Thy faithful and enkindle in us the fire of Thy love! 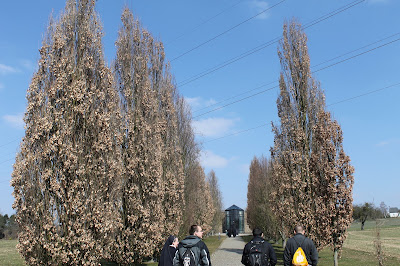 Posted by Brandon Miranda at 9:15 AM